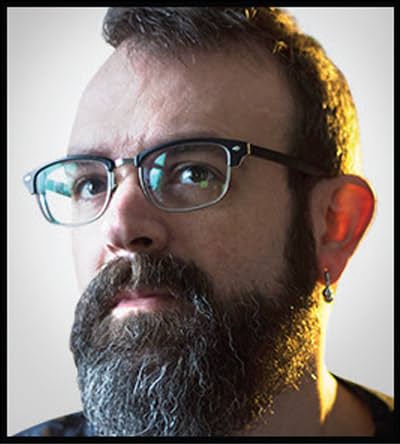 Tyler Crook is an American artist and illustrator. He began his art career as a graphic designer and 3D-modeler. After a twelve-year career of making art for sports video games, he made the switch to illustrating comic books. His first book, Petrograd (Oni Press), came out in 2011 and earned him a Russ Manning Promising Newcomer Award at the age of 37. That same year Tyler became a regular artist on Mike Mignola’s B.P.R.D. Hell on Earth (Dark Horse Comics). He also contributed regularly to 6th Gun (Oni Press) by Cullen Bunn and Brian Hurtt. In 2014 Tyler worked with award winning author, Jonathan Maeberry, on the Bad Blood (Dark Horse Comics) limited series; this was his first fully painted comic series. Not long afterward Tyler teamed up with Cullen Bunn again to create Harrow County (Dark Horse Comics). In 2016 Harrow County was nominated for an Eisner Award for best new series and won Ghastly Awards in 2015 and 2016 for best ongoing series. Harrow County will end in 2018 with 32 issues and 8 collected volumes.

Tyler’s work is notable for his expressive characters and vivid watercolor technique. His approach to storytelling finds the emotional core of the story and uses every panel to express it as clearly as possible. While many of his peers are making amazing work with computers, Tyler remains almost completely analog, still drawing and painting on paper the old-fashioned way. This is not because he’s a Luddite but simply because he enjoys the physical process more than working digitally.

He lives in rural Oregon with his super cool wife and many pets.