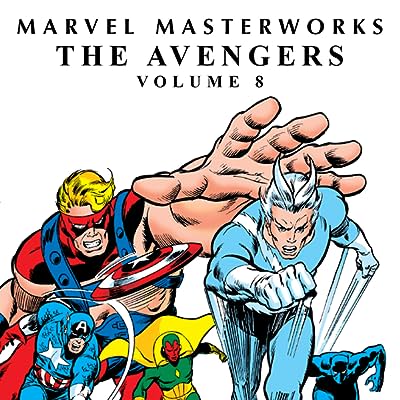 You know it's trouble when Kang the Conqueror drops in from the 41st century, but this time he pits our heroes against Hyperion, Nighthawk, Dr. Spectrum and the Whizzer - the Squadron Sinister - in a cosmic chess match! And as if one menace wasn't enough, then from across time the Avengers must also face the combined combat skill of the Captain America, Sub-Mariner and Human Torch of 1941! Next, it's a focus on the King of Wakanda, the Black Panther, as he infiltrates the supremacist Sons of the Serpent. But when he's captured, will the Serpents use T'Challa to incite a war that will tear the nation apart? Then it's the return of Quicksilver and the Scarlet Witch, the villainy of the Man-Ape and the Lethal Legion, and guest-stars galore with the Black Knight, Nick Fury, Captain Marvel and Black Widow!